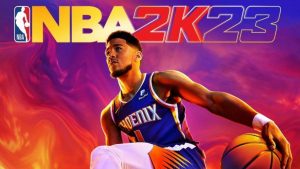 Booker joins Michael Jordan, Diana Taurasi and Sue Bird that who will grace the covers for the various special editions of NBA 2K23.

Booker was named to the 2021-2022 All-NBA first team this past season and is one of the NBA’s brightest young stars.

“It’s a dream come true to see myself on the cover of NBA 2K,” said Booker.

“I’ve been a huge NBA 2K fan since I was a kid, and it’s surreal to finally join the exclusive club of basketball greats who’ve been cover athletes. I’m also honored to share this year’s covers with the iconic Michael Jordan, who changed the game for all players who came after him, as well as two of the all-time WNBA GOATs, Diana Taurasi and Sue Bird, who continue to make a huge impact on the game.”

Number 23 as a 2K23 cover athlete was an obvious choice for 2K Games, as the all-time great Michael Jordan appears for the fourth time on an NBA 2K cover. The latest announcements also confirm the second consecutive year 2K has chosen to feature a WNBA star on its covers, with two-time MVP Candace Parker being the choice last year.