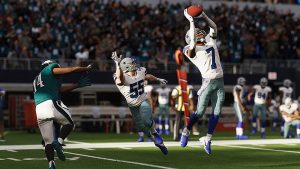 Maddens often ridiculed Franchise mode had a different kind of issue for users this time around. Some players who logged in to Madden 23 over the holidays experienced an issue related to data storage that corrupted their Franchise files — causing irreparable damage to some. Initial estimates are that 60% of League Data will not be recoverable.

According to the team at EA, the issue ran from December 28 around 2:45 pm EST to December 29 around 12:45 am. Players trying to log in to the Madden Franchise server around this time experienced a data storage error resulting in corruption of their Online Franchise, Connected Franchise Mode Leagues, and Face of the Franchise files.

EA says its teams are attempting to restore those files, but they estimate only 40% will be recoverable, in some instance players will have permanently lost their saves.

For those who didn’t log in during that window, you appear safe from the data storage issue and should be able to play. As for anyone who experienced a loss, there doesn’t seem to be anything you can do until the update next week.