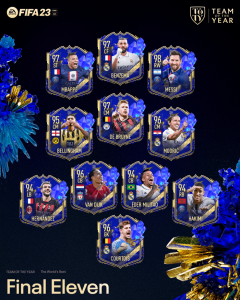 FIFA 23 has announced its Team of the Year final Eleven. Each year EA SPORTS gives fans the chance to pick their favorite players. With over 10m votes cast worldwide and over 100 available payers; Jude Bellingham, Lionel Messi, Kylian Mbappe and Karim Benzema were the headliners of this years squad.

Mbappe won the highest percentage of votes among attackers (23 per cent), while De Bruyne was the majority pick among the nominated midfielders (21 per cent).

Here’s a look at the final eleven.

FIFA 23 Team of the Year