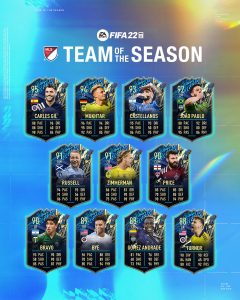 The MLS TOTS was determined via a vote from the FIFA 22 community, with the New England Revolution totaling three players on the squad. 2021 Landon Donovan MVP winner Carles Gil received the biggest bump with a rating boost of 95.

The players chosen will receive a skill boost and upgraded player items in FIFA 22, as well as a TOTS card which will be available in FIFA Ultimate Team.

The complete list of MLS TOTS players is as follows: