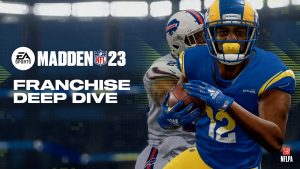 Prior to its release in August, EA has revealed new information about changes that will be coming to Madden NFL 23’s Franchise mode.

Franchise mode is one of the most popular game modes on Madden every season, so a lot of us want to know what is being done to improve it. This time around, it seems like EA is looking to address many of the biggest complaints that players have had over the last few years.

Broken down in a newly released video, EA highlighted a number of the changes that will be implemented in Franchise mode.

EA has overhauled the entire process involved with free agency, which means that moves in each offseason will have be be thought out a bit more.

Not only is the Free Agency hub getting a visual remodel, but the game will also implement new systems related to player motivations. There will now be a vast number of these motivations that players will take into account when looking to sign with a team. As such, signing a player will be more complex compared to past games where you would simply offer a high amount of money to get a player on your roster.

In addition, Franchise mode is going to implement a larger number of other updates. Scouting is getting refined, we will also see draft and trade logic getting overhauled. As far as cap space management, Madden 23 is also now implementing the rollover cap, which will give you more flexibility when it comes to constructing your roster.

If you’d like to learn more about all of the changes happening with Franchise this year, you can check it out on EA’s website.